“Let prejudices and local interests yield to reason.
Let us look to our national character and to things beyond the present period.”
â€” George Washington

Recently a Brother visited the fantastic museum and memorial in Alexandria, Virginia, and sent back these stunning photos of the grounds and interior, along with the corresponding descriptions. Here’s hoping that each of us can one day visit this magnificent edifice, erected not only to George Washington as an individual, but to Freemasonry as a whole.

Make sure to click on any picture to see the image in its full glory! 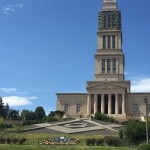 Designed by Harvey Corbett, who also created plans for some of the first skyscrapers in America, the central building is inspired by the Parthenon, its upper section inspired by the Lighthouse of Alexandria. Consisting of three sections, the upper building represents architecture in the Doric, Ionic, and Corinthian styles. Masons funded this monumental edifice through donations alone â€“ including a small portion of our annual dues â€“ no debt and no public funds were used, and the whole of the building took 12 years to finish.

The main hall of the building is the actual memorial, consisting of a wonderful statue of Washington himself (donated by DeMolay), flanked by composite pillars. Behind the pillars on each side are murals and stained glass portraits of Masonic figures in Washington’s life, such as the various Lodges of New England coming to the aid of displaced Philadelphians after the Continental Army retook the city. Lead by General Washington, the Brethren acted in accordance with relief toward all, one of the three great tenets of our profession.

Above, stained glass portraits of Benjamin Franklin, Dr. Joseph Warren, General Mordecai Gist, Robert Livingston, Elisha Cullen Dick, and the Marquis De Lafayette look over the memorial, while a nearby mural shows the cornerstone laying ceremony for the national Capital building in 1792. The trowel Washington used in this ceremony was later used in other major buildings, such as the Supreme Court.

The original Alexandria Lodge burned down in 1782 but has been reproduced inside the memorial. The chair located in the East is the chair Washington himself was installed in, with the altar’s Bible dating from the late 1700s. 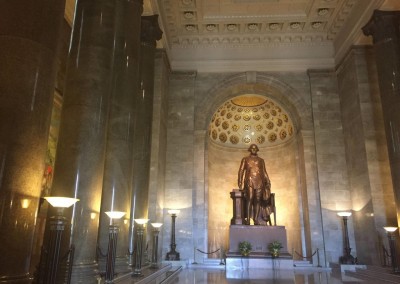 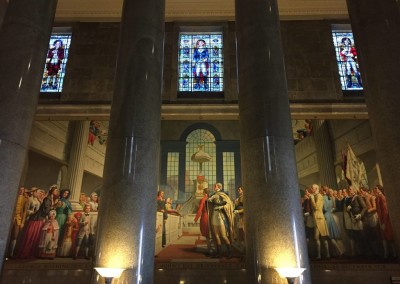 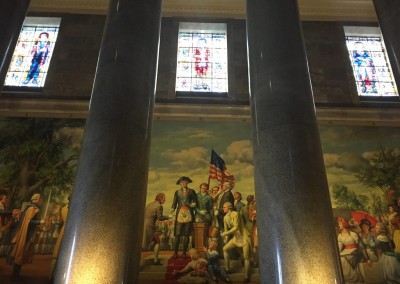 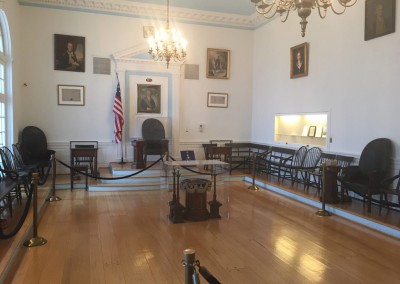 Several artifacts are also on display. The clock below as in the room at the time of Washington’s death. Suffering from severe Quinsy (a rare form of tonsillitis), his fellow Brother Elisha Dick was attending and recommended the experimental tracheotomy procedure, but was overruled. Upon Washington’s death he removed the weight from the lock to mark the time. The trowel visible on the left was used by Washington to lay the cornerstone for the US Capital building, and the gavel was a replica of Washington’s (with the original on display at Mt. Vernon). 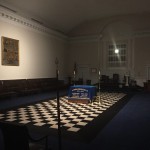 There is even a Lodge that meets in the building today. Save for meeting nights their beautiful room is open for public display.

Other artifacts include an apron he was given in 1781 to commemorate his victory in Yorktown, which is perhaps his most recognized Masonic regalia, having been worn at the Capital’s cornerstone-laying ceremony and subsequently immortalized in paintings. Also a flag given to Washington by his dear friend, the Marquis du Lafayette. 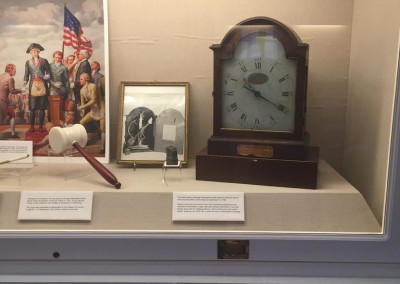 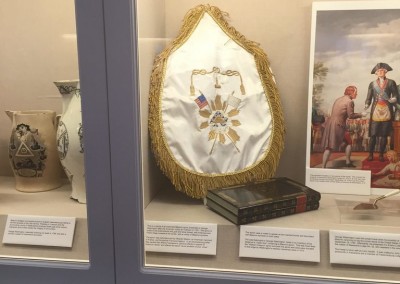 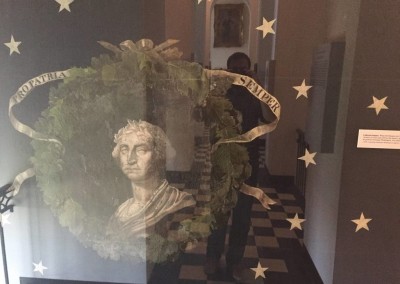 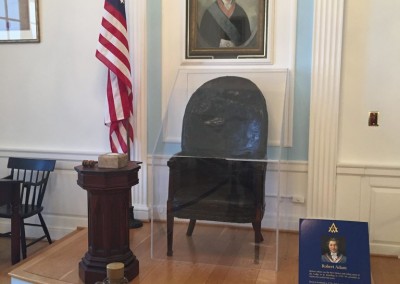